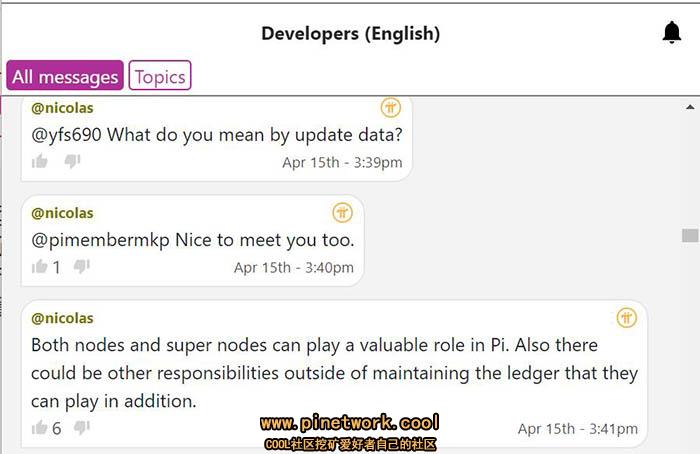 @blackcat68 Thanks for your efforts and for sending us the email. I was able to find it.
Both nodes and super nodes can play a valuable role in Pi. Also there could be other responsibilities outside of maintaining the ledger that they can play in addition.
@zyf1588 Your computer seem pretty powerful. I am sure there is a role for you in Pi. Over the coming weeks and months, we will be running nodes in different settings and configurations to be able to tell with certainty what are the minimum requirements and the recommended specifications for the node computers.
@yfs690 We have a few different updates on the coming weeks. Not just about the node, but about other things we are preparing too. Stay tuned. From February 15 until March 31 we had been communicating with the community very frequently and we wanted to give people a little break. So the last couple of weeks we have been silently working on technical improvements we will be releasing soon.
@NoRMi44 Yes. Simply install it on the computer you like. And wait for our instructions. We will update the node software to give people real time feedback on how well they are doing in terms of becoming a node.
@z3nysf No worries. We will release and update where you can self declare any duplicate accounts you accidentally created with no penalty. The duplicate accounts will be deleted along with any referral bonuses they caused. But since you self-declare them your main account will not be penalized any further.